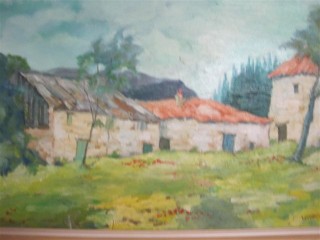 The foundation received Kpare of artist Leo Weber some beautiful paintings of landscapes for the benefit of the agricultural and other projects in the Ghanaian village Kpare. A small portion of the donated works is offered last year for a special auction and sold to the highest bidder. The yield is added to the funds from which new loans can be provided to the partnership with the villagers in Kpare. The Foundation has more canvases of the West Frisian artist who perfectly fit the atmosphere and the colors of this part of Ghana. They have been exhibited in the Martinus church in Schellinkhout during the art trail there on the Heritage. The works there (on request) to be viewed. In the attached video clip can already see a small impressie.Interesse? Please contact info@kpare.nl and report your preference. We will contact you as soon as possible.

In early 2009, a special action held for Kpare, thanks to the cooperation of FKS Ceramics, Ms. Fredie Kok. She was one of the participants of the Kunstroute Drechterland and took the initiative for a special raffle. She suggested the ceramics made ​​by its plastic of an African woman. The lots sold have yielded more than two thousand euros. The lucky winner was Marian from the Weather Venhuizen. The action resulted in money except for Kpare program on the third weekend of June a lot of publicity. Similar actions have been planned with other artists.